I moved to the Capital Region from New York City in 2012. When I first got here, there wasn’t much to do. I’d go to the basketball courts, I practiced how to drive in empty lots at night, I’d write as much as I could. But besides restaurants, malls, and movies, I was bored. In NYC, no matter what time of day it is, I could go downstairs and find life. People moving in every direction, noise, arguments, sirens. NYC was home. But now, home was the sound of crickets at night. Bodegas on every corner replaced by a drive to the nearest Wal-Mart or Target. My usually lively neighbors of color replaced by little old white women who wave at me when I take out the trash and converse about the weather or their pets. Yes, your boy has sold completely out, and proud of it. But selling out came with a cost. A better place to one day raise kids meant sacrificing my ability to enjoy myself and have fun in the city that I loved and still do. Another love of mine has always been videogames. I am OBSESSED with videogames. Besides clothes, videogames is where the majority of my money goes. I decided that since I was here and bored out of my mind, I would start collecting older video games, all the games I had as a child. It would be fun, consume my time, and it would give HP a break from me because in my boredom, I annoyed her. I looked up retro video game stores in my area. The search led me to a place called “Jay Street Video Games” in a mall not too far away. When I got there, I located a game I played as a child constantly, “Sunset Riders”. The game was $95 dollars. Obviously that’s a lot for a game, and being new to “Retro Collecting”, I didn’t understand why. Instead of helping me understand, the guy working there tried to make me feel like a complete idiot if I didn’t buy the game. “That’s the cheapest you’re gonna find it anywhere! You’d be a fool if you didn’t get it at that price.” I didn’t know if he was selling video games or used cars. I didn’t want to buy anything from him. It made me angry that he was talking to me like that. I put his game on the counter and I left. 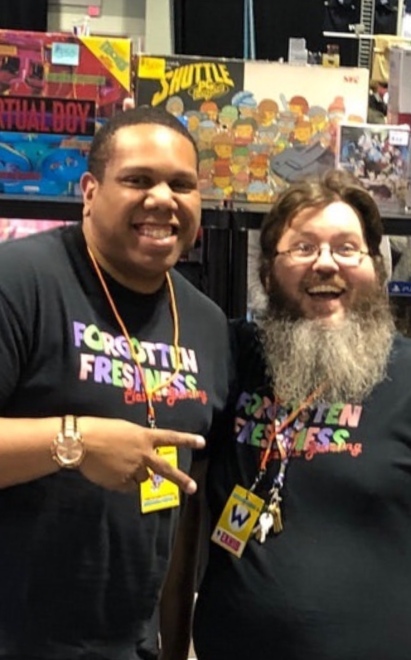 In my anger, I decided to Google another retro video game store. “Forgotten Freshness” came up. It was kind of a drive from where I was and I didn’t want to drive all that way and deal with another car salesman. I decided to call before I drove. The guy who picked up sounded extremely cheerful. I asked If they had a copy of Sunset Riders and they did, $80 bucks. I figured what the hell, 30 minute drive to save $15 bucks why not. When I got to Forgotten Freshness, I was greeted by the same bubbly voice that was over the phone. The guy was short and solid, and had a beard a foot and a half long. He introduced himself as Frank, the owner of the store. I let him know that I called earlier about the copy of Sunset Riders. Frank snapped his fingers and walked behind his counter. “I put it away for you in case you were coming in to look at it!”, he said happily. He let me know that he cleaned and tested all his carts and that he thought it was a really fun game. I asked why was it so much and he took the time to explain to me how some retro games increase in value the better they are, the better they look, and the better they play. I didn’t feel dumb talking to him. I didn’t feel like I was being cheated or sold something I didn’t want. Frank made me feel like he wanted to help me and that’s what he did. I found myself driving to Forgotten Freshness About once every two weeks. Frank was always there and always greeted me the same, “What’s up my man?!”. After about a year or so of seeing my face and slightly getting to know me, Frank invited me to a video game convention in Philadelphia. 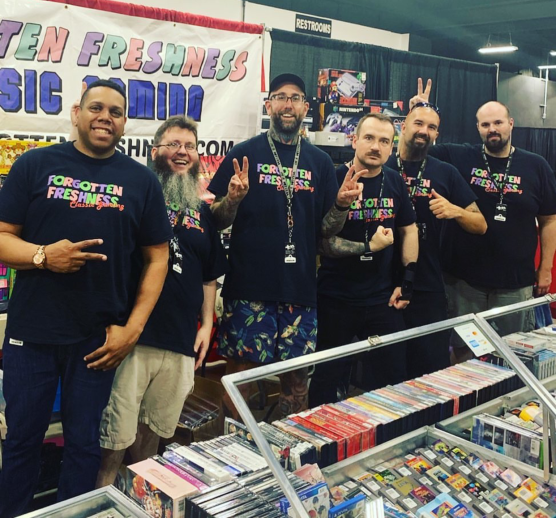 Too Many Games is the biggest video game convention on the east coast. Its basically Gamer Heaven. If you’re looking for a video game that’s hard to find, 9 times out of 10, you’re going to find it at TMG. I was thrilled that Frank invited me, thrilled that he trusted me enough to be apart of his team, and Frank has an AMAZING team. Guys like Henry, Adam, and Jeremy. All EXTREMELY knowledgeable about video games and the mechanics on how to fix, take care, and play them. They help out at the store not because they have too, but because they want to. Guys like John, Rob, and Vince. Literal Rockstars who could be doing ANYTHING else, but would rather be cooped up in a hotel room for a weekend to help out the biggest rockstar they know in Frank. It shows how much he’s loved. And to know Frank is to basically love him because if he can do something for you, he will. You can tell the people around him are extremely thankful that he’s in their lives because of the kind of person he is. His store provides a place for them to all come together and just be the kids again. So to be apart of his team, at first, I felt like the standout, but now, I feel like I fit in perfectly. I’ve gone to TMG for 3 years in a row as part of the Forgotten Freshness team, and every year, I have a better and better time. Trips to WAWA, CheeBurger CheeBurger, or the arcade. Hanging in a hotel room altogether and playing video games or watching “Kung Fury” on Youtube. It’s awesome to just be around such a great group of people. I’m so grateful that I found Forgotten Freshness, Frank, and the rest of the guys. It’s an amazing thing to be apart of. And one day, I’ll probably be old and gray, and moved far and away. But I’ll never forget how fresh it was… Thanks Frank.